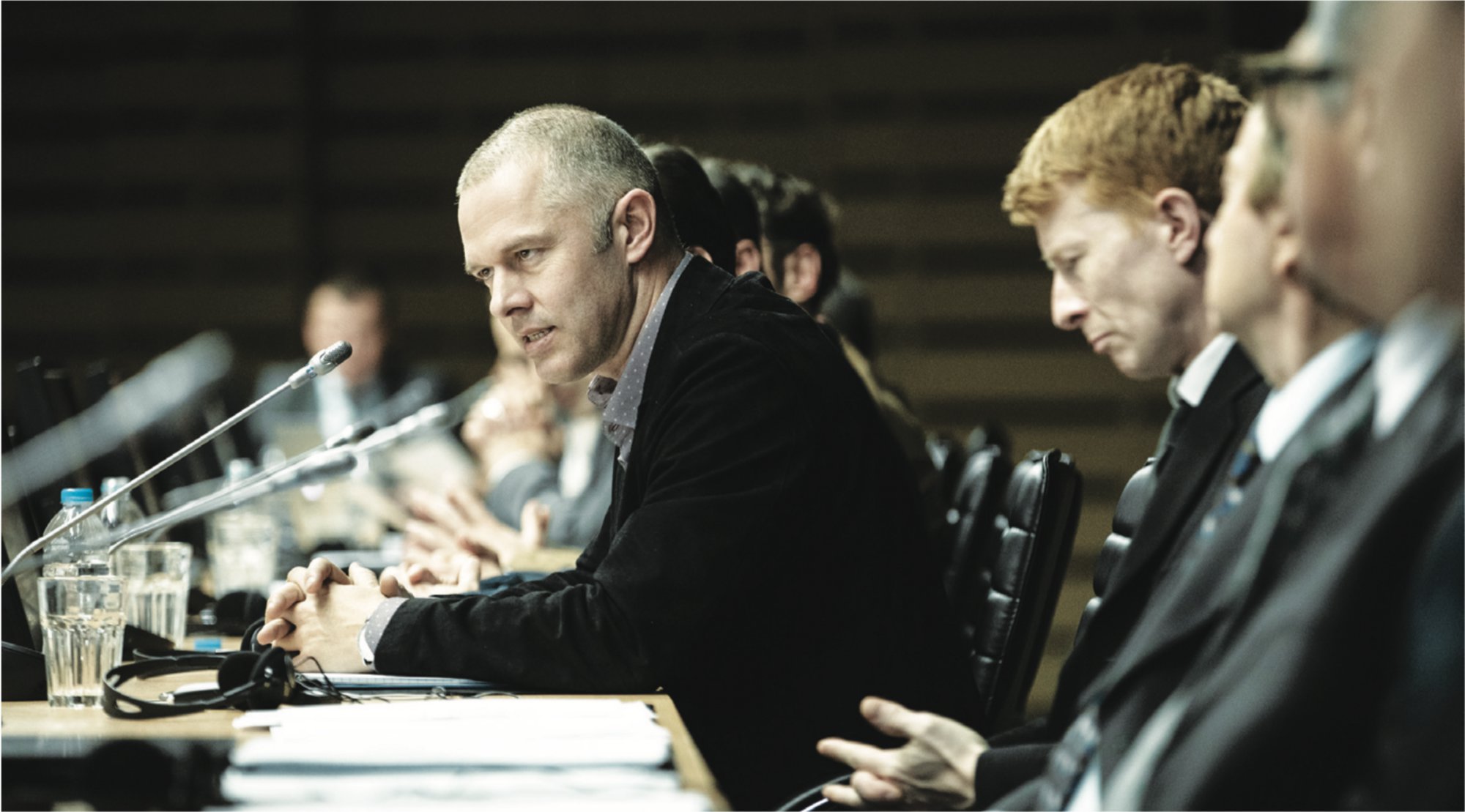 Costa-Gavras directs a political, ironic and edifying film about the unsuccessful attempts by Greece to influence the European troika during the debt crisis of 2015

At 86 years old, Costa-Gavras hasn’t lost any of his bite or humanistic political convictions, brilliantly shown many times throughout his prolific filmmaking career, from The Confession to Amen and with Missing, as well as Z, which got five nominations and two awards at the 1970 Oscars and denounced the dictatorship of colonels in Greece. It is by, once again, approaching a topic from the recent history of his native country — the Greek debt crisis in 2015 and the heated negotiations which opposed, for months, the (“radical” left) government of Alexis Tsipras, then in power, to the European troika (the European Commission, the European Central Bank and the International Monetary Fund) — that the filmmaker turns a spotlight on what he clearly considers to be a modern variation on totalitarianism, muffled yet as merciless as ever.

From Athens to Brussels, passing through Paris, London and Frankfurt, Adults in the Room, revealed out of competition at the 76th Venice International Film Festival, plunges us behind the scenes of important European decisions, in the footsteps of the combative Greek Minister of Finances Yanis Varoufakis (Christos Loulis). Costa-Gavras’ film is an adaptation of his book Adults in the Room: My Battle with Europe’s Deep Establishment. An economist without any political experience, Varoufakis — appointed to his position by Prime Minister Tsipras (Alexandros Bourdoumis) following the victory of the Syriza party at the polls on 25 January 2015 — wants to obtain from the creditors of his country a restructuring of the Greek debt and sustainable reform plans, since the austerity imposed during the five previous years only made the situation worse (the debt increased by 6% up to €473M while domestic incomes decreased by 26%). Far from naive (he always carries his resignation letter in his pocket) and aware that his opponents will not be easy to deal with, he nevertheless hopes to find a compromise and persuade them. But from bilateral conversations to Eurogroup meetings, he will realise that it is a real wall he is confronted with, with as its basis his German counterpart Wolfgang Schäuble (Ulrich Tukur) supported by Eurogroup president Jeroen Dijsselbloem (Daan Schuurmans) at the front lines. A duel of one against many (Christine Lagarde, Mario Draghi, Pierre Moscovici, etc.) where Yanis will have to fight for a word in a statement, suffer the duplicity of some when faced with the omnipresent media, prepare a secret plan B in case of a Euro exit, avoid the shut down of Greek banks, witness the Stock Exchange going down, navigate the manoeuvres of Tsipras’ close circle and know whether he can still count on the latter (himself playing with his own political survival) when confronting a European bloc that is asking for the head of the rebellious minister — only to realise that man is worth very little in today’s Europe when financial dictates are at stake.

From a material which could have been particularly dry (numbers, men in suits around big meeting tables, etc.), Costa-Gavras successfully creates a captivating, instructive and often amusing film, with a terrible irony running through the nuances of this new version of David vs. Goliath (where the latter wins). This small, pleasing contrast is reinforced by the sirtaki music composed by Alexandre Desplat and by a few downright surrealist sequences (Tsipras surrounded in a labyrinth by the other Europeans leaders, myriads of numbers floating in the air of the European Central Bank). The film is indeed charged, clearly engaged in favour of one side of the argument, and some might consider its satire to be too one-sided, but nothing is less certain… What is certain, however, is that Adults in the Room intelligently highlights, in a manner that makes it accessible to all, some of the workings of power which insiders would rather see remain in the shadows, with the pretext that “How could common people decide on complex economic issues?” And who better than a Greek person and a filmmaker of Costa-Gavras’ calibre to expose the various facets of this question of democracy?

You're going to make it! 💛 "Support your local