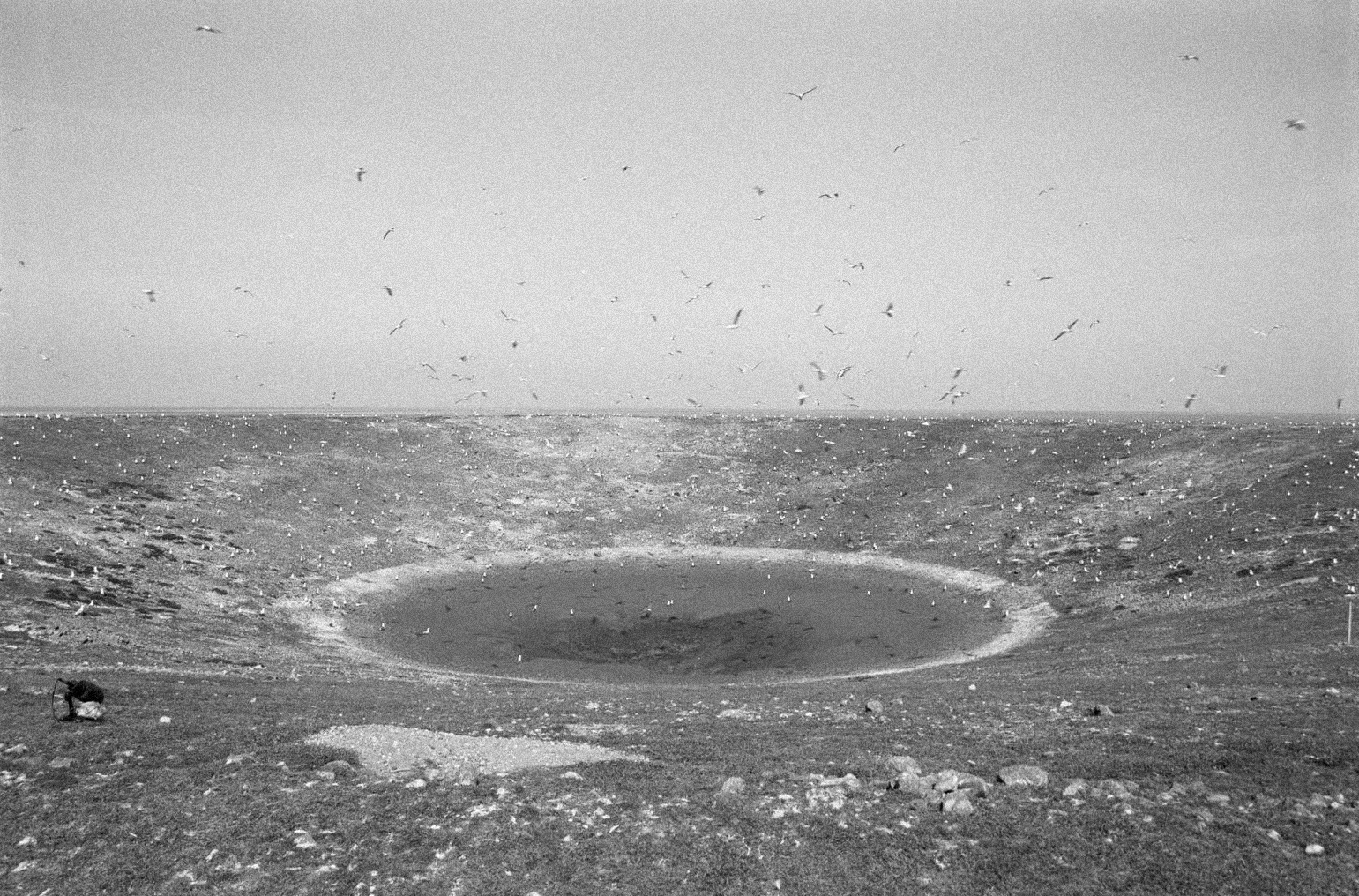 “Neil Henderson’s work involves varied ways of mapping and exploring site, strata, and landscape. With static long takes, Henderson uses the landscape as a formal structure, reflecting on presence and place, repetitive variations of similar subjects/objects in a way that reminds us of Robert Smithsson and Richard Long’s land-art, and photographic work by Ger Dekkers and Jan Dibbets among others.”

INTRODUCTION
By Neil Henderson himself.

THREE STUDIES IN GEOGRAPHY (part 3)
2011 | 16mm to digital | b&w | sound | 6’30
Three distinct locations are brought together in “Three Studies in Geography”, which encompasses three previously separate films made over the last ten years. Each location presents a particular balance of land, sky and water. In the final and the third part ‘Reservoir’ of ”Three Studies in Geography”, Henderson focused on, as Nicky Hamlyn writes, ”an experimental freshwater reservoir, since abadoned, a few miles off the Lincolnshire coast of England. The curious circular structure, which resembles a perfectly formed volcano, is now a haven for nesting birds. Henderson made a series of shots from a set of equidistant positions on the perimeter of the structure. The scene is dominated by seagulls. The birds animate what is otherwise a static scene, not least in a cinematic sense.” The final section of the film is a circumnavigation of the island in 36 shots. The soundtrack is a continuous recording made while walking around in the island. – Neil Henderson

TIDAL ISLAND
2011 | 16mm to digital | color | silent | 13’07
The subject of the film is a man made island two miles off the shore on the east coast of England. Built in the 1970s, the Outer Trial Bank is an experimental island, the purpose of which was to see if it were possible to build a larger barrage across the Wash and transform it into a fresh water reservoir. Further development of the project was abandoned when seawater was found to permeate the walls of the island, but is and now a home to a colony of sea birds. The film examines its location, structure, and the movement of the tide around it. – Neil Henderson

TIDAL
2005 | 16mm | color | silent | 3’30
A film camera is modified to double expose 16mm film (the principle is similar to how standard 8mm film is exposed). A Polaroid of the sea is filmed for the duration of its development along both halves of the film. The tide comes in and goes out again. – Neil Henderson

THREE STUDIES IN GEOGRAPHY (part 1-2)
2011 | 16mm | b&w/color | silent/sound | 18’00
The first part of “Three Studies in Geography, ‘Drains’ is a study of the irrigation canals of south Lincolnshire. The camera is always static, and the framing is always the same. The second part ‘The Street’ focuses on a naturally forming jetty on the north Kent coast. It is filmed during low tide over the period of a month – its shape being determined by the daily shifts in tidal patterns; sometimes more of the street is seen, sometimes less. – Neil Henderson

CONNEMARA
1980 | 16mm | color/b&w | sound | 31’00
Made on a trip to Connemara in western Ireland in 1980, the film offers a long, slow meditation on time and landscape. Static shots linger and stare into the landscape and upon it, the traces of human activity is registered, whilst in the quiet collision of imagery and ambient sounds that return and repeat, the site lies in wait. – Guy Sherwin