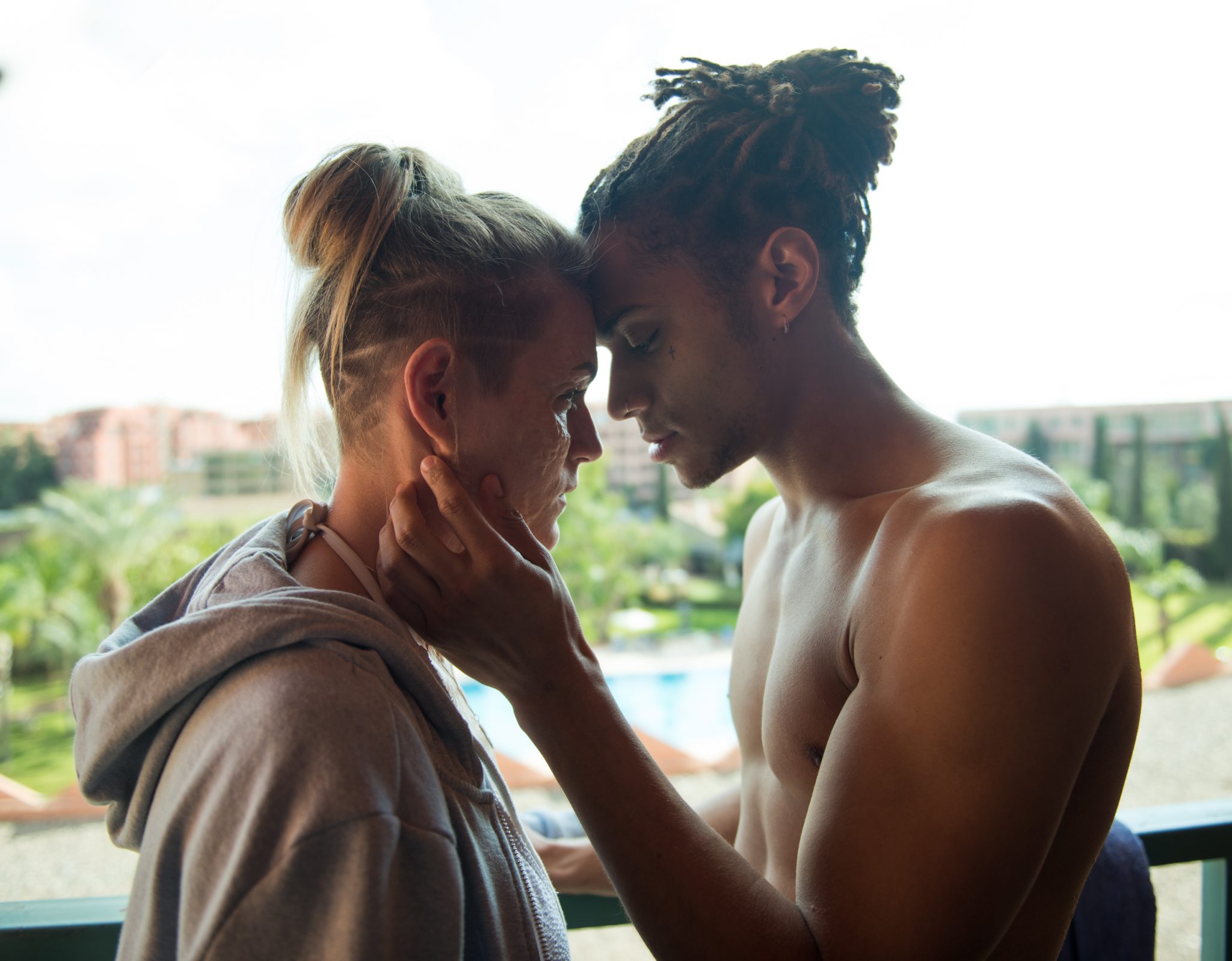 Set in a selfie-obsessed world of Instagrammed “beauty”, it follows the survivor of an acid attack as she struggles to reclaim her life, and redefine her identity. Making her English-language debut, Polak (director of festival-favourite award-winners Hemel and Zurich) conjures a fearless drama, as raw and revealing as it is tender and affecting. There are no dramatic platitudes here, nor soft-soaped cliches. This is full-blooded (and arrestingly tactile) fare, which gets right under the skin of its central character, in appropriately unruly and unflinching fashion.

Scarred by her ex-partner and father of her child, Jade (Knight) is discharged from hospital wearing a claustrophobic lower-face mask that eerily recalls Édith Scob’s lonely imprisonment in the 1960s horror film Les yeux sans visage (Eyes Without a Face). Jade is a feisty young Londoner attempting to manage motherhood while still in the throes of her own youthful rebellion. But her two-year-old daughter, Rae, who has been staying with her shoplifting grandmother Lisa (Katherine Kelly), is frightened by Jade’s appearance and, heartbreakingly, has to be convinced that Mummy is a “nice monster”.

Outside the cocoon of the hospital, Jade faces a range of reactions as she revisits her old haunts – the parks, pubs and clubs in which she once felt secure. Her best friend Shami (Rebecca Stone) is encouragingly upbeat about Jade’s reintegration into their hard-partying group, although a covert rivalry for the affections of Naz (Bluey Robinson) threatens to come between the pair. But when the NHS says it can do no more for Jade (“So I’m left with this fucking dog’s dinner?”), she turns to the internet, where Moroccan clinics promise miraculous results at bargain-basement prices. She also discovers online a world of virtual interaction; an arena in which random sexual encounters can be conducted on her terms – at least initially.

Co-written by Polak and Susanne Farrell, this European co-production is a multifaceted drama which deals with a range of complex personal and political issues. On one level, it’s a powerful indictment of the poisonous misogyny that pervades contemporary society, subtly drawing connections between casual lad-culture bullying and online “slut shaming”, and the vicious physical attacks that have increasingly become a part of our daily news cycle. Yet look deeper and you find an insightful drama about mothers and daughters; about estrangement and reconciliation; about the new world of virtual interaction and its relationship with reality in an increasingly fragmented society.

Having survived a horrific fire at the age of eight and endured the schoolyard taunts about her burns that followed her into adulthood, Knight clearly understands the challenges that face Jade – a beautiful force of nature who refuses to succumb to self-pity. While prosthetics were employed to augment and transform Knight’s own scars into those of an acid-attack survivor (plaudits to make-up effects designer Morten Jacobsen), there’s nothing artificial about her portrayal of Jade, which is utterly authentic, drawing us into her experience with candour and conviction. Knight (who normally works in healthcare) really is a breathtaking presence on camera – on this evidence, she could have a long and varied screen career ahead of her, if she so wished.

Despite the down-to-earth toughness of its subject, Polak and cinematographer Ruben Impens explore an expressionistic palette, full of vivid splashes of colour: the reds and blues of Jade’s dreams; the pulsating lighting of the clubbing scenes; the dayglo purple and green of a car-wash conversation, during which Jade talks openly about the horrors of her ordeal. Restlessly prowling cameras follow our heroine through streets, corridors and walkways, discreetly catching the furtive glances of those around her. Meanwhile extreme close-ups have a richly intimate quality, reminiscent of the work of Lynne Ramsay or Andrea Arnold.

There is humour too, and plenty of it. A scene where Jade veils herself in a black chador and discovers the strange liberation of becoming effectively invisible has real playful charm. Knight is a terrifically physical performer who dances her way through Dirty God with the dexterity of a silent actor, conveying contradictory emotions (joy, anger, ecstasy, bereavement) through her stance, her walk, her attitude. Often, Polak simply lets the camera rest upon her face, allowing her fiercely expressive eyes to tell the unfolding story.

Rutger Reinders’s brooding electronic score provides a sensual and evocative backdrop, while well-placed tracks such as Sevdaliza’s Human (“I am flesh, bones; I am skin, soul”) provide quasi-choric commentary on this empowering and ultimately uplifting portrait of a woman.